The Kectil Program congratulates Sudan on the overthrow of its brutal dictator, President Omar Al-Bashir on April 11, 2019. Well done. Having ruled the country for 30 years, it is said that Al-Bashir has taken over US $9 billion dollars from his country and hidden it internationally. He is primarily responsible for the war in Darfur, which it is estimated killed between 200,000 and 400,000 Sudanese people. He is the first sitting President to be indicted for war crimes by the International Criminal Court (ICC) for allegedly directly a campaign of mass killing, rape and pillage against civilians in Darfur.

Omar al-Bashir rose to power in 1989 following a military coup and has been reelected three times in elections criticized for electoral fraud. His presidency was characterized by violent struggles between the Janjaweed militia and rebel groups such as the Sudanese Liberation Army (SLA) and the Justice and Equality Movement (JEM) in the form of guerrilla warfare in the Darfur region. The civil war has displaced over 2.5 million people out of a total population of 6.2 million in Darfur and has created a crisis in the diplomatic relations between Sudan and Chad.

The War in Darfur was a major armed conflict in the Darfur region of Sudan that began in February 2003 when the Sudan Liberation Movement (SLM) and the Justice and Equality Movement (JEM) rebel groups began fighting the government of Sudan, which they accused of oppressing Darfur’s non-Arab population. The government responded to attacks by carrying out a campaign of ethnic cleansing against Darfur’s non-Arabs.

Who led the coup d’état against Al-Bashir?

Lt. Gen. Ahmed Awad Ibn Auf, the defense minister of Sudan and the Vice President of Sudan, led the coup. The military forced al-Bashir out of power and arrested him. After the coup, Ibn Auf declared himself the de facto Head of State. He also announced that a transitional military council would rule the military for the next two years. He suspended the country’s constitution, declared a three-month state of emergency and imposed a curfew from 10 pm to 4 am, effectively ordering the dissolution of the ongoing protests. He also dissolved the National Legislature and national government, state governments and legislative councils in Sudan.

How did the people react to the news of al-Bashir being removed from power?

The people were overjoyed after al-Bashir was removed and arrested. However, their joy was short-lived when Ibn Auf took over. Ibn Auf stepped down on Friday following protests from the people. The transfer of power was branded a ‘palace coup’ by opposition forces and questioned by the international community, including the UN Secretary-General, the Chairman of the African Union, and the United Kingdom. Ibn Auf, who is under US sanctions for supporting genocidal militias in the Darfur region, had been under international pressure to establish a civilian transitional government.

Who is the current successor?

He was succeeded by Lt Gen Abdelfattah Burhan, the Inspector-General of the Armed Forces, who was sworn-in as new interim president on Friday evening. Speaking on TV, Lt-Gen Abdel Fattah Abdelrahman Burhan announced the restructuring of state institutions, the end of a night curfew and the release of political prisoners. The army would maintain “peace, order and security” across Sudan during an already announced transition period that would last at most two years until elections could be and civilian rule introduced, he added.

What do the protestors want?

The protestors want a civilian transition to civilian rule. Organizers of mass protests in Sudan have told the BBC they want the full dismantling of the “deep state” left behind by ousted leader Omar al-Bashir. A spokesman said leaders of the past regime should be put on trial. Protesters remain camped outside army HQ in the capital, Khartoum, demanding a civilian administration. The Sudanese Professionals’ Association (SPA) which has spearheaded the protests, urged supporters to foil any attempt to disperse the sit-in. A military spokesman also promised not to disperse protesters and said the council was “ready to implement” whatever civilian government the opposition parties agreed. The military has also said that they will let the people elect their own Prime Minister instead of appointing one.

This upheaval has given an opportunity for youth to speak out and fight for their rights. A photo of Alaa Salah, a 22-year-old engineering and architecture student went viral. The photo captures Alaa standing on top of a white car addressing a crowd of women. Women’s lives were fundamentally repressed in recent decades as they’ve faced restrictive laws that dictate what they can wear and where they can go. They were criminalized for just being themselves, they were criticized for wearing pants and their lives were threatened.

Can Sudan transition to a peaceful, law-abiding nation?

We hope so! We urge Sudanese to ignore those who try to divide the country based on religious, cultural, gender, ethnic or tribal grounds, and instead to give equal respect to every person. We also urge Sudanese to take this opportunity to create a government that will allow them to be happy, law-biding citizens. Sudan has a remarkable history that goes back to 2500 BC. It has beautiful land and resources. The Kectil Program has Sudanese Colleagues. It is our wish that the deep state is eliminated, military rule is rejected, the people are safe and the sun shines on this beautiful country again. 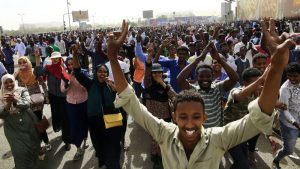 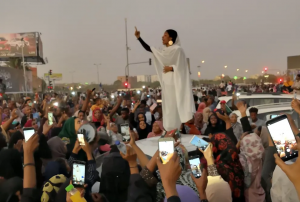