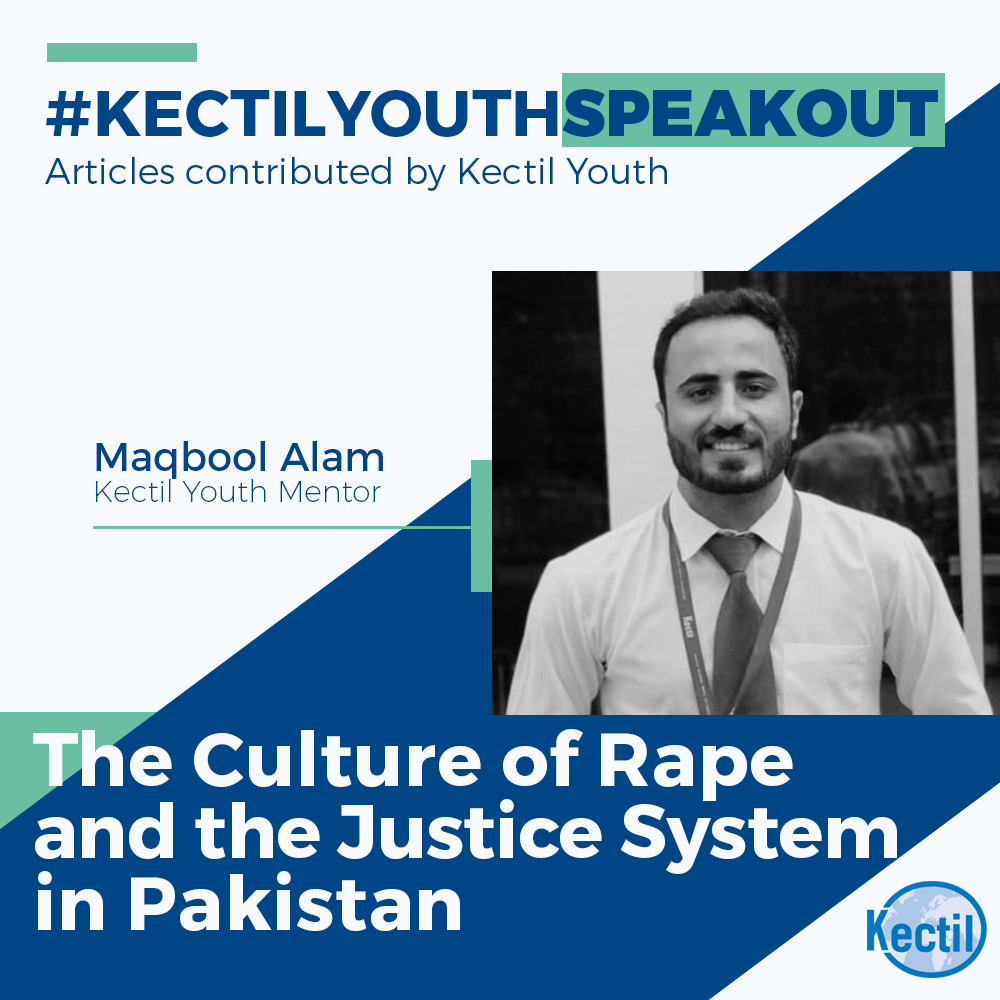 It is neither an emerging culture nor it is a new one. The rape culture in Pakistan has continued destroying the fabric of society for decades. The minors, including both males and females, as well as women, have remained prone to abduction, rape and more often subsequent murder at the spot. The following paragraph illustrates the latest grave incident of the gang rape of a woman in front of her two children on Lahore-Sialkot Motorway that jolted the society of Pakistan. The heart-wrenching incident occurred on the 9th of September 2020. The story is narrated according to the information given by state media and reports after the incident.

The female was on the way to Gujranwala, her hometown, from Lahore at 1 am. The distance between the two cities is almost 114km. She was traveling with her two children. She had traveled just 10 kilometers and had entered the Gujjarpura area of Punjab. Unfortunately, she is reported to have stuck in the middle of the motorway due to a deficiency of fuel in her car and the absence of any nearby petrol station. Her panic has led her to ask her relatives back in Gujranwala for help. She has remained helpless just kilometers away from the motorway toll plaza. When she has called police at 15, the authority is reported to have said that the area does not fall within their jurisdiction. The helpless woman had no option than to lock the side windows and stay quiet inside the vehicle in the expectation of her relatives to arrive on time. Within no time she has encountered two unknown individuals who, by breaking the car windows, have brought her to a nearby field and gang-raped her at gunpoint in front of her children. The horrendous crime on the one hand and the remarks of the Capital City Police Officer (CCPO) on the post-incident day on the other has initiated a disturbance in the mainstream media and public. The CCPO is reported to have said that the woman should not have traveled alone with kids at this hour of the night without a male partner with her. Now the law enforcement agencies are looking for the real culprits, presumably being identified as Shafqat and Abid.

Narrating the whole story has a purpose here. It raises a few important questions. First, if someone especially a woman in trouble calls police for help, is it legitimate for the so-called protectors to say that the area does not fall in their jurisdiction? Is there anything called humanity and voluntary service in times of need known to our authorities except what they perform as a duty? Second, why the motorway police remained so ignorant? Third, is it justified to say that the woman should not have traveled at this hour of the night? How far is police culpable for both victim blaming and inefficiency? These are some, but not limited, burning questions in the minds of ordinary citizens.

Before going into the depth of the justice system in Pakistan, there is a need for the contextualization of the prevailing rape culture on a historical basis. Certain laws in the past have led to the normalization of rape as a sociological notion. Firstly, the idea of rape was blended with adultery and fornication in the time of Zia-ul-Haq, the then-president and dictator of Pakistan in the decade of the 1980s. Under the Zina Ordinance (one of the six parts of Hudood Ordinance), rape, adultery and fornication were fused to have a single meaning. The law was amended in 2006 by giving a separate definition to rape as it is today. But the former had already exploited the women’s right to freedom, choice and consent that the effects of which pervade to this day. Thus rape was seen as women’s fault more than men’s desire.

Secondly, it is aptly said that the pen is mightier than the sword. My quest to research the solution to the rape problem in Pakistan led me to an article written by M. Al-Ashari: The Solution to Rape Problem of the Third World Countries. I started reading the article expecting some divine revelations. Unsurprisingly, the document appeared to be so radical and lacking logical reasoning. It is a comparison between male sexual desire and biological hunger. Thus he concludes: men think more about sex, their libido is more responsive to drugs and men want (and need) more sex. Therefore, his solution to the problem of rape is simple: implement a dress code for women, ban the promiscuous display of women’s bodies, promote social marriages and encourage polygamy. This is something very intriguing. In the time when women’s participation is needed in the worldly development and progress of nations, laws and articles such as these will only bring turmoil, exploitation of women’s rights and injustice. So the prevailing culture of rape has never been the center of discussion in Pakistan leading to inefficient laws and policies. Or it has happened that the discussion has lost its importance and consistency within two to three days. After a few days, the debate in media and conferences again fades away until another shocking incident grabs the attention of the public causing fear and trauma. The solution to the problem of rape does not lie in what leaders like Zia-ul-Haq and writers like M. Al-Ashari have centered their focus around.

Both the informal and formal justice systems of Pakistan have failed to address the right to security, privacy and protection of its citizens. The effects of the informal justice system known as “Panchayat”, directed by the local elders exist in parts of the country. In the district of Muzaffargarh in Punjab province, Mukhtaran Mai was one of the victims of this local Panchayat committee. The local clan known as Mastoi Baloch, richer and more powerful, allowed 4 men to gang rape Mukhtaran Mai as a form of honor revenge in 2002. In the post gang rape days, she was expected to commit suicide as a social norm in that society but she did not give up on life. She is a rape survivor and women rights activist who was later awarded the North-South Prize by the Council of Europe. Six men were arrested, including rapists, and were sentenced to death by an anti-terrorism court. The gang-rape of Mukhtaran Mai launched a 9 years battle that concluded with a verdict by the supreme court of Pakistan acquitting all but one of the accused. The ambiguity as well as the delay in justice depicts the gloomy picture of both the formal and informal justice system of Pakistan.

The police system of any country plays a vital role in protecting the citizens of that country. A corrupt and politically motivated police system ruins the process of justice and service delivery. Unfortunately, Pakistan faces a serious dilemma in its police system. Many intellectuals in Pakistan such as Ishrat Hussain, former governor of the state bank of Pakistan, term it as the politicization of the police system. To gain political ends, politicians have been using the police force as a means. This political affiliation has put a limit and inefficiency in the force. An official in the process of getting experience and adjusting himself with a district is suddenly transferred which exploits his dignity as well as the system of justice. There have been frequent transfers of senior police officials. Punjab, the largest province of Pakistan, has witnessed the transfer of six Inspector General Police in just the last two years. This behavior in transferring top officials of police puts a serious question on the political elite. Until and unless the politicization of police is not eradicated, Pakistan cannot see the dawn of justice. Besides, the professional training of the security forces would put the country on the trajectory of its success of justice.

Acquitting rapists has always raised questions on the justice system of Pakistan. The accused rapist, Abid, in the recent Lahore-Sialkot Motorway incident was acquitted in 2013 after he was arrested due to a rape case. Reports demonstrate him as a serial rapist and his involvement in various robberies in past. Not only this, but several more cases of rape also reveal the same fact of the rapist being acquitted. Also, it is rightly said that justice delayed is justice denied. The Zainab Alert Bill was passed in National Assembly in May 2020 after two years of the incident that took place in February 2018 in the District of Kasur. A minor girl of seven years old named Zainab Ansari was raped and murdered in the said district of Punjab. However, the culprit was hanged to death in the following year. But the series of the grave issue did not stop there. Laws have been inefficient to minimize the menace of rape crimes.

Unfortunately, rape is such a sociological concept that is attached to some stereotypic, traditional and stigmatized principles. Rape is consequently normalized due to societal behavior and attitude about gender and sexuality. This has remained a historical challenge for feminist movements as well. Pakistan is not an exception where these behaviors are dominating. The attitude and response attached to the rape culture are victim-blaming, slut-shaming, sexual objectification, trivializing rape, denial of widespread rape, refusing to acknowledge the harms inflicted upon the victims. This is what needs to be stressed upon how we as a society respond to rape cases.

Some scholars argue that the solution to the rape cases has usually taken insincere and incomplete steps leading to a haphazard and chaotic society. The solution to the rape neither lies in the public hanging of the culprits nor does it lie in the widespread protest. It is a step towards changing the mindset of people and officials and reeducation of people at the grass-root level. There is a need to change the meaning which people attach with rape and rape victim. All the socially constructed norms and culture adhered to rape need to be transformed from the root. They include, but are not limited to, victim-blaming and expecting the victim to commit suicide. Alternatively, people need to understand that it is not the fault of the female. Rather it is the patriarchal mindset of the people who consider her to be weaker than the males. Also, instead of waiting for the victim to commit suicide people need to inherit the idea of rehabilitation and encouragement. Furthermore, acquitting the culprit before his set time in the jail needs to be reconsidered. Whatever damage he has inflicted upon the victim both psychologically and physically must be dealt with accordingly. Their reeducation and socialization will prove promising in the future.

*This is the original work of Maqbool Alam – Kectil Youth Colleague 2018 and Youth Mentor 2020.

Maqbool Alam is from Gilgit region of Pakistan. He joined Kectil Youth Leadership program in 2018. During his whole time with us in that year, he continuously showed dedication, perseverance and hard work. Maqbool was selected as a young leader from Pakistan and subsequently invited to the Kectil Youth Leadership Conference in Atlanta, the US in July, 2019, as an Award that his efforts truly deserve it. He was one of the two colleagues to represent Pakistan in the conference to debate and discuss the variety of community issues and the role of young leadership. Maqbool did his intermediate in pre-engineering from Aga Khan Higher secondary Gilgit, Pakistan. Recently, he has completed my graduation in BSc Mechanical Engineering from University of Engineering and Technology Lahore, Pakistan.