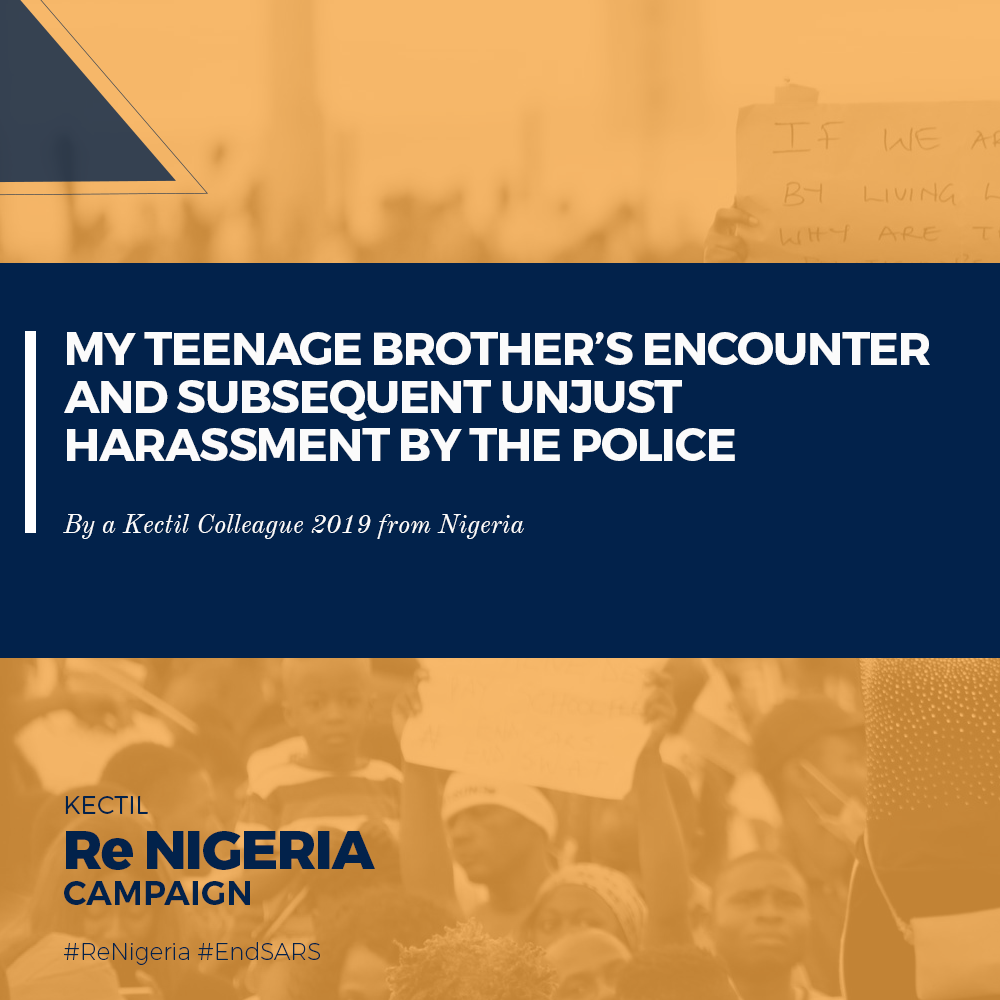 I remember some time last month, about the time before the #EndSars campaign started trending, I would read stories of other youths on social media, mainly young guys who had been unlawfully harassed and had to endure inhumane treatment from SARS officials just because they dressed fine or they had iPhones or dreadlocks on their heads. It was sad, I would read their posts and feel pity for them.

So one day, while my brothers and I were talking, I asked them how with all the stories about SARS everyday, how come none of them had complained of being harassed. They told me I was lucky to be a female, that I won’t understand the harassment guys face from the police everyday out there. Then I advised them to be careful not knowing the fate that lied ahead for us, particularly for me youngest brother.

By that time, my youngest brother who is a fashion designer at Emperor’s clothing had tinted his whole hair gold color, he is quite fashionable and talented too. He has a penchant for making stylish outfits. We hoped that his hair color would not attract issues with the police not knowing that it would result in an encounter with them.

Barely a week afterwards, while he was on his way to Yaba market, as usual to get materials for his customer’s orders, some policemen stopped him at the bus stop, went through his bag, found measurement tape, some pieces of his brand logo he was going to attach to customer’s orders and other things you would find in a fashion designer’s bag. Obviously they needed the silliest excuse to pin him so they asked for his phone and went through it, cooked up a story and took him to their station even after he tried to convince them he was just a fashion designer and not a ‘yahoo boy’ (internet scammer). My brother was shaken and filled with fright, he is just a teenager.

He was detained and couldn’t meet up with his client’s order delivery that day. We had to bail him out despite providing the receipt to show that he bought his phone and the bail amount was quite huge.

After collecting the money, the Deputy Police Officer later gave my brother some fabrics to make for him, with the assurance that no other policeman would harass him in the neighborhood again as long as he is still at the police station.

It was a very fearsome and humiliating experience for my brother and my family such that we were too shaken to come out with our story.

Ours may have come and gone but I believe so many other families might fall victim if nothing is done to address police brutality and unjust harassment of the people.

Thank you Kectil for giving me this opportunity to share our story.

*This is the original work of a Kectil Colleague. As they preferred, we would like to keep their identity anonymous.