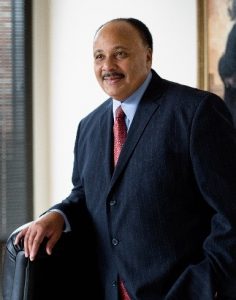 Mr. Martin Luther King III is the oldest son of the late Dr. Martin Luther King, Jr. and Mrs. Coretta Scott King.  Mr. King serves as an ambassador of his parent’s legacy of nonviolent social change. He is an American human rights advocate and community activist. Mr. King has devoted his life to working in the non-profit sector to promote civil rights and global human rights and to eradicate the “triple evils” of racism, militarism and poverty which his father identified as the scourges of humankind. He has served as an election monitor and observer in South Africa, Nigeria and Kenya. In addition, Mr. King has conducted nearly 40 Poverty Study Tours in a groundbreaking initiative, which has sparked public debate and law enforcement advocacy on the issue of poverty. In conjunction with Ambassador Andrew Young and other partners, Mr. King co-founded Bounce TV, the first independently owned and operated TV network in the U.S. featuring African-Americans. The network’s content includes movies, sports, documentaries and original programming. Mr. King is married to Arndrea Waters King and the father of a daughter, Yolanda Rene, the sole grandchild of Dr. King Jr. and Coretta Scott King, who was named in honor of his late sister Yolanda Denise King.