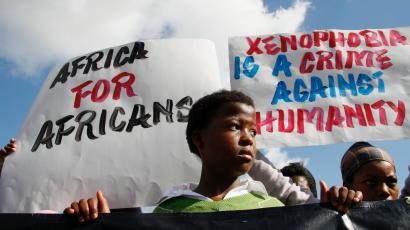 A disturbing trend of increasing unrest and scattered violence has been occurring in South Africa from rioters causing chaos primarily in Johannesburg claiming that foreigners have stolen their jobs. They have looted foreign owned shops at night and torched cars and buildings. A few deaths have been reported. The latest unrest started after a fire engulfed a building in Johannesburg and quickly spread across several neighborhoods and major cities including Jeppestown, Malvern, Hillbrow, Thembisa, Turffontein and parts of Tshwane. The attacks have especially targeted at people from Nigeria, Zimbabwe and Somalia.

Xenophobic violence has occurred for years in South Africa. In 2008, 60 people were killed and 5000 were forced to flee their homes. In 2015 seven people were killed before the police intervened. In 2017, the Deputy Minister of Police Bongani Mkongi said, “you won’t find South Africans in other countries dominating a city into 80%. We’re surrendering our land and it’s not Xenophobia to talk truth. We fought for this land from a white minority. We cannot surrender it to foreign nationals.”

Xenophobia refers to prejudice against someone perceived as “foreign” or “other.” It is a discriminatory and dangerous ideology.

It is believed that the attacks are caused by marginalized, unemployed, black South Africans who feel that foreign nationals are taking their already limited jobs, abuse South African resources, and compete for the scarce resources available.

Police Minister Bheki Cele described the attacks as a national emergency. As of yesterday, 100 people had been arrested for looting and violence. The African Union Commission Chair Moussa Faki Mahamat called for further immediate steps to protect the lives of people and their property and to ensure that all perpetrators are brought to account for their acts.

Following the attacks, the Nigerian Government through its High Commissioner to South Africa Ambassador Kabiru Bala offered safety to the Nigerian nationals. Some Nigerians are now retaliating against South Africans in Nigeria with terror group Boko Haram issuing threats to kill South Africans over the Xenophobic attacks. Nigerian artists and businesspeople are calling to boycott South Africa until the issue is solved. The Nigerian President Muhammad Buhari is set to send a special envoy to South Africa to address the problem and help curb Xenophobia.

The World Economic Forum on Africa 2019 kicked off today in Cape Town, South Africa. African Presidents from Rwanda, Malawi and Democratic Republic of Congo withdrew from the forum. Other African leaders are threatening to boycott the forum as well on the basis that they do not want to be in a country where other Africans are being attacked.  Zambia canceled a football match with South Africa. The two teams were set to play on Saturday at the National Heroes Stadium in Lusaka, but the game was canceled by the Football Association of Zambia (FAZ).

One might ask why the marginalized South Africans didn’t use this strong force to address the extraordinary corruption scandals under Jacob Zuma’s presidency that are estimated to have cost South Africans GDP R27 Billion (1.8 Billion USD annually and 76,000 jobs). It is also estimated that South Africa may have lost R700 Billion (47.3 Billion USD) to corruption since independence. This money could have been used for job training, housing, educational scholarships and innovation grants. Those are true crimes worth addressing.

As Nelson Mandela said, “Resentment is like drinking poison and then hoping it will kill your enemies.”

Mandela also said “No one is born hating another person because of the color of his skin, or his background or his religion. People must learn to hate, and if they can hate, they can be taught to love, for love comes more naturally to the human heart than its opposite.”

We are proud that The Kectil Generation is made up of youth who accept and respect each other regardless of race, nationality, religion, and ethnicity.