Everyone has a story. Our parents, grandparents, ancestors, the places and situations they were from and the places and situations we grew up in help create the fabric of our lives. What is your story? We would love to hear from youth in developing or least developed countries about your relatives and your communities. Our stories are a reflection of our culture–beauty, love, challenges, successes, failures, advancements, hardships and just…life. Please send to mail@kectil.com

The Malmar Knowles Family Foundation (“MKFF”) is the parent organization of The Kectil Program. It is a Non-profit Corporation organized under the laws of Georgia, USA and Section 501(c)(3) of the Internal Revenue Code.

Here is the story of the people who formed the fabric of my life…My story is not of course from a developing country nor does it reflect the types of challenges that can be found in developing countries, but it does describe the roots and the people behind The Kectil Program, who I would like to introduce you to.

My mother was Valerie Brewster Malmar, and when she married my father, Dr. Cecil M. Knowles, became Valerie Malmar Knowles. She was born in Westfield, New Jersey in 1921 to Hilda Reeb and Ward Brewster Malmar. She was the life of the party and the sunshine in the house. When she passed away in 2015, it was stated that “According to her daughters, Valerie was the best mother a child could have. She combined wisdom, fun, generosity, good judgement and a grand sense of adventure. Whenever she walked into a room her infectious smile and radiant countenance brightened the room. It was not uncommon for strangers to engage her in conversation because she possessed that rare ability to listen, to understand and to lift others up.” She taught us not to take life too seriously, and to find something positive in any situation. She also taught us to speak with every person in the room to discover what is important to that person, and we would then be quizzed on what we learned!

Hilda Reeb, born in 1894, Valerie’s mother and my grandmother, was an extremely smart woman who read four newspapers a day (and studied the stock market!) and spoke five languages. Hilda was born in Ohio to Charles E. Reeb and Jennie Burrows, who later moved to Brooklyn NY when it was still farmland and then to New Jersey. Hilda spent the majority of her life in Westfield and Summit, New Jersey, and died in 1975. She was educated at Miss Mason’s School, The Castle, in Tarrytown NY, a girl’s school where she was elected President of her class.

Flip Through the Castle Booklet

Hilda was born before women could have a career or maximize their talents, and so she entertained herself by playing duplicate bridge tournaments in New York City, playing the piano beautifully without any written music sheets (wonderfully enjoyed during the holidays for sing-alongs) and traveling on numerous adventure trips around the world. I remember going with my parents to the port of New York to drop her (and many trunks) at huge ocean liners and then picking her up with the cultural treasures she brought back. She always traveled alone, again highly unusual for a woman at the time. The captains on the ships often asked her to provide guest piano performances for others on the ship.
[gap size=”1.313em” id=”” class=”” style=””]

I attach some of her Passports here, which begin in 1950. Her Passport stamps as early as the 1950’s establish her keen interest in developing countries, with evidence of entry into Egypt, India, Pakistan, Nepal, Thailand, China and other countries.

Hilda’s father, my great-grandfather, Charles E. Reeb, born in 1869, was a successful businessman and entrepreneur. He was in the business of construction materials, starting the company “Door & Sash” in Pennsylvania and then creating Reeb Millwork in 1912 in New Jersey. The Reebs lived on Highland Avenue in Westfield, in a house that had an in-door swimming pool! Charles was known for his intelligence and sharp business skills. When the great recession hit in 1920, Charles kept all of his employees on the payroll even though there were few sales. Hilda’s husband Ward Brewster Malmar purchased Reeb Millwork from Charles, and then sold it on retirement. The Reeb company still exists in more modern form today (www. Reeb.com).

Hilda’s husband and my grandfather, Ward Brewster Malmar, was born in 1890 in New York. Ward traces his roots to Malmӧ, Sweden. His father, Ernest Malmar, was born in 1855 in Sweden and immigrated to the United States from Sweden with his brother, passing through the entry port of Ellis Island, N.Y. When the U.S. immigration officials asked their last name, the brothers, who did not speak English, gave the name of their hometown, Malmӧ. The immigration official translated this as “Malmar”, which became their last name. Malmar is now the first name of this Family Foundation, which can be considered a form of tribute to the many people from countries who use various ways to provide a better life for themselves and their families. Ward was a kind, gentle man who ran Reeb Millwork and then retired to his boat in Fort Lauderdale, Florida, where he died in 1959.

Ward’s mother (Ernest’s wife) was Grace Abigail Brewster, who was born in 1865 and died in 1929. Grace was a direct descendant of William Brewster, a Pilgrim from England with diplomatic, political and religious experience who was one of the leaders of the 1620 voyage of the Mayflower from Netherlands to Plymouth, Massachusetts, and among the founders of the Plymouth Rock Colony. Grace was a member of The National Society of Colonial Dames of America, which is an American organization composed of women who are descended from an ancestor who came to reside in an American colony before 1776, and whose services were rendered during the Colonial Period. 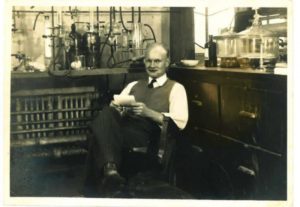 It has seemed ironic to some that my mother, Valerie Knowles, a sophisticated socialite from New Jersey, married Cecil M. Knowles (1917-1998), who was born and raised in a very rural area of Mississippi, an agricultural state located in the southeastern United States. My father grew up on a working farm that did not have electricity until after President Franklin Delano Roosevelt enacted the Rural Electrification Act of 1936, and did not have inside bathrooms during his youth. The family grew almost all of their own food with meat-producing animals and crops. His father, Claudie Martin Knowles (1896-1969) and mother Eleanor Knowles (1897-1992) ran a dairy farm. The family included two sons (my father and M.B.) and two daughters (Merle and Alla Frances). In many ways, Mississippi at that time resembled the conditions sometimes found in disadvantaged areas of developing countries. The children were taught in a one room school house for all grades. Therefore, of importance to the Kectil Program today, there was a great emphasis on education and strict discipline from mother Elnora which encouraged her children to study into the evening on the farm by lamplight. The parents’ demand for achievement motivated both my father and his brother to leave the farm, pursue higher education and ultimately both receive Masters and Ph.D. degrees from the University of Texas in Organic Chemistry.

After receiving his Ph.D. in Organic Chemistry, Cecil took a job in industrial chemistry at General Aniline and Film (now GAF Corporation) in New York and moved to New Jersey. During his career, he helped develop the formula for liquid detergent and the formula for the very popular Dove soap.

After receiving his Ph.D. in Organic Chemistry, Cecil took a job in industrial chemistry at General Aniline and Film (now GAF Corporation) in New York and moved to New Jersey. During his career, he helped develop the formula for liquid detergent and the formula for the very popular Dove soap.

Cecil met Valerie Malmar through friends in New Jersey. Valerie’s mother Hilda told Valerie that Cecil was the one to marry because Hilda saw Cecil was a very smart self-made man who valued education-and Valerie listened to her mother.

My father was quiet, studious and smart. Cecil emphasized education and good grades to me and my sister and demanded hard work. Another attribute I watched and admired was that when he was in a situation with people talking about subjects he might not be familiar with, he made sure he was always the last person to speak. He would listen to what each person had to say, and then when he finally spoke he had time to think about it, said something quite intuitive and then stopped talking. A great skill I am not sure I have accomplished!

This unlikely group of a fun-loving socialite, a woman too smart for the time period and community she lived in, a successful businessman, an immigrant who passed through Ellis Island, a descendant from a leader of the Mayflower voyage who established the Plymouth Colony in Massachusetts, and a family who raised children in a home without electricity and bathroom plumbing with one-room school house training that produced two Ph.D.s in chemistry are the history of The Malmar Knowles Family Foundation that brings The Kectil Program to you.