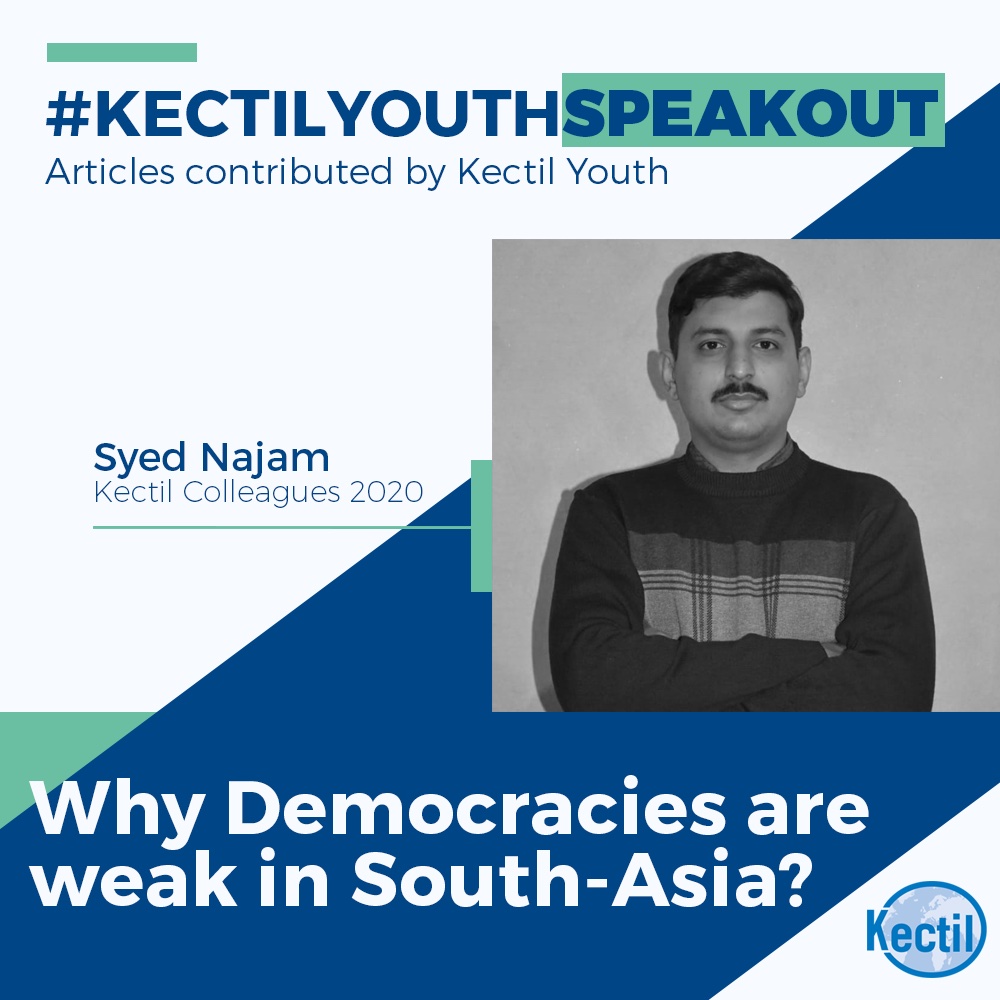 Democracy in South Asia has been going through many ups and downs. Although democracy has existed here for a very long time, it could not have developed very well. In recent years, successful democratic transitions have occurred in countries like Pakistan, Bangladesh, Sri Lanka, and Nepal. India, the most populous democratic country in the world, also exists in this region. Some democratic institutions have also been working very well. However, despite making significant achievements, democracy could not have entrenched its firm roots in these countries. People are wandering here and there for their basic needs. Extra-judicial killing is the norm of society. Human rights are being blatantly flouted by the people in power.

Many factors are culpable for these undemocratic trends. From the complex web of these various factors, it is possible to disentangle the most prominent ones. These are issues like political instability, unwanted involvement of intelligence agencies in political matters, the politicization of administrative matters, militancy, religious extremism, and corruption, which are hampering this region’s growth. Let’s discuss these issues in detail to have a clear picture of democracy in South Asia.

Since the creation of Pakistan, it couldn’t practice the actual democracy. Democracy has been in constant threat and under the pressure of military establishment. Owing to multiple factors, democracy could not have nourished properly in Pakistan. The low literacy rate in Pakistan made it impossible for people to understand the significance of a democratic society. Masses of Pakistan are completely unaware of their civil rights, so they have no concerns about what kind of system is ruling the country. At the time of partition of 1947 sir, Winston Churchill said

“Power will go to the hands of rascals, rogues, freebooters; all Indian leaders will be of low caliber & men of straw. They will have sweet tongues and silly hearts. They will fight amongst themselves for power and India will be lost in political squabbles”

After partition, Pakistan suffered leadership crisis due to untimely death of Muhammad Ali Jinnah in 1948 and there was no single credible leader left in Pakistan after Jinnah’s death, whereas India was ruled by Jawhar Lal Nehru more than 15 years and it was enough time to strengthen the democratic institutions and political society and that’s why today India is in far better in terms of development as compared to Pakistan. From 1951 to 1957, when Pakistan was facing a leadership challenge, India was enjoying consistent democratic leadership.

Use of Money and Power in politics

Illegal use of money has made it difficult for the common man to participate in the politics of Pakistan. The common man is living below the belt and in poor economic conditions. But on the other hand, big landowners or feudal lords are participating in politics due to their enough resources.

Local government is the beauty of democracy. Usually, democracy emerges from grass root level but unfortunately in Pakistan, the local body system is not empowered and strong enough. The leadership of Pakistan believes in a centralized power system rather than a dissolution of power to the ground. Successive Governments had been conducting local bodies elections but the funds were never allocated properly for the local administrations.

Higher literacy rates will provide good strength to build up a greater understanding of rights, Democracy, and democratic culture. Here in Pakistan and South Asia, education is one of the key factors which can change and provide eminent strength to democratic Institutions. Pakistan’s last two decades are a clear example of it where the transition of one civilian government to another democratically elected civil government happened successfully. It is due to the increasing literacy rate which has changed the scenario at all. People have now a proper understanding of their rights and the responsibilities of governments towards their masses. A higher literacy rate will bring competent entities in power. The government would be accountable for their corrupt deeds. Only with awareness, people would choose the best people with the best policies.

Here in Pakistan religious class has no understanding of democracy. They consider it forbidden in Islam. Pakistan is in the huge influence of religion because it was made on the base of religion Islam. This is the need of time to build up democratic understanding and compatibility between religious class and democracy to provide outstanding support to democracy. Religion has been one of the most important factors since the creation of Pakistan.

Here is a need to bring understanding between the prevailing religion and Democracy to make democracy acceptable in that society. The religious mongers are very powerful pressure groups. If they would support democracy, there would no major hurdle left behind in the way of a stable future of democracy in Pakistan. Share of power with religious class can make them stakeholders in a democratic state by molding some of the democratic rules with religion that can provide the strength to democracy in a far-right religious state.

Better economic condition is also one of the factors that leave a positive impact on the health of democracy. In England and developed countries democracy is in a better condition whereas in third world countries like Pakistan and India democracy is in the worst condition and poverty is the main reason for it. More than 50% of the people of Pakistan are living below the belt of poverty and deprived of the necessities of life. If we could improve the economic conditions of the people of third world countries that would strengthen democracy at all.

Direct relief to the common people

If we see the developed democracies in the different regions their public is enjoying handsome relief packages, utilities, and subsidies. But here in the third world, the public isn’t getting the actual perks and privileges of democratic regimes. Here united nation and other international institutes need to pressurize the third world political leaders to improve the living standard of masses and provide immediate relief to the masses to make a writ of democracy better. The better living standard of the public can improve the grip of democracy.

Syed Najam Ul Hassan Hamdani is a kectil colleague of 2020 badge from punjab pakistan. He belongs to a very backward but border (Indo-pak) aligning area of Pakistan.has been working for Human rights with amnesty International and pakistan International Human Rights Organization since last three years. He has a very active background of climate change initiative in his city as a member of national youth assembly of Pakistan.In 2019 he was awarded with the title of Senior Ambassador of Harvard University and Harvard’s appreciation letter on his extraordinary research with Harvard University. He recently joined Comprehensive Nuclear Test Ban Treaty youth group to prevent more nuclear tests. He writes blogs in different but renowned newspapers of Pakistan on Minorities rights ,religious freedom ,Interfaith harmony and against extremism. He has done Master in Information Technology from Superior University Lahore.