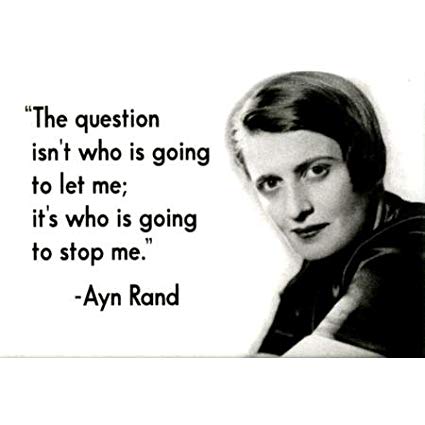 One can act as a leader in many different ways, including through non-violent social activism, acts of kindness, intellectual creativity, and by learning to using your voice to say something important. This week we focus on another aspect of leadership, writing. Writing is a skill set that can be developed with practice to open the minds of others. It can cause others to see a situation with new clarity or with a different perspective. Great leaders are often also great writers.

We would like to highlight a woman who was able to use her sharp writing skills to highlight a unique political perspective and influence others to this day. Her name is Ayn Rand (born Alisa Zinovyevna Rosenbaum). She was born in 1905 in Russia and died in 1982 in the U.S.  In 1917, she and her Jewish family were affected by the Russian Revolution, after which the Bolsheviks came to power under Lenin and imposed a severe form of Communism. Her father’s business was taken away and their property confiscated. This had a profound effect on her.

Ayn Rand became a writer and philosopher. She wrote political novels to make a point about excessive government and its effect on human growth, innovation and incentive. She was also known for developing a political system named Objectivism. Ayn was a famous and controversial figure especially to those who didn’t agree with her philosophies or ideas. However, her message was carried to university classrooms, to Hollywood, to Congress, to the editorial page, to talk shows and radio programs.

Her best-selling novels are The Fountainhead and Atlas Shrugged. Her breakthrough novel The Fountainhead, was rejected by 12 publishers before finally being accepted by Bobbs-Merrill Company. In this book she wrote about the struggle against mediocrity and excessive government. A famous line from her book is “What would John Galt do?” John Galt was a fictional character who is a philosopher and inventor.  He believed in the power of the human mind and the rights of individuals to better themselves through for individual gain, which she believed would translate into social gain.  Ayn Rand tries to convince the audience that innovation, inventorship and social progress is kept motivated by individual freedom. Society framed in a manner that maximizes and rewards individual incentive will result in an improvement in the quality of life for everyone. It was basically the opposite of Communism, which she was highly against after seeing what it did to her family and community.

People from all walks of life from businessmen, to students, to professors, have studied Ayn’s views, and whether they agree or not, it has motivated an enormous number of conversations about the best way to structure society. Her writing was disruptive and provocative.

You can have an influence on people by learning how to express your views in writing to encourage discussion.

“The smallest minority on earth is the individual. Those who deny individual rights cannot claim to be defenders of minorities.”

“Reason is not automatic. Those who deny it cannot be conquered by it. Do not count on them. Leave them alone.”

“The hardest thing to explain is the glaringly evident which everybody had decided not to see.”