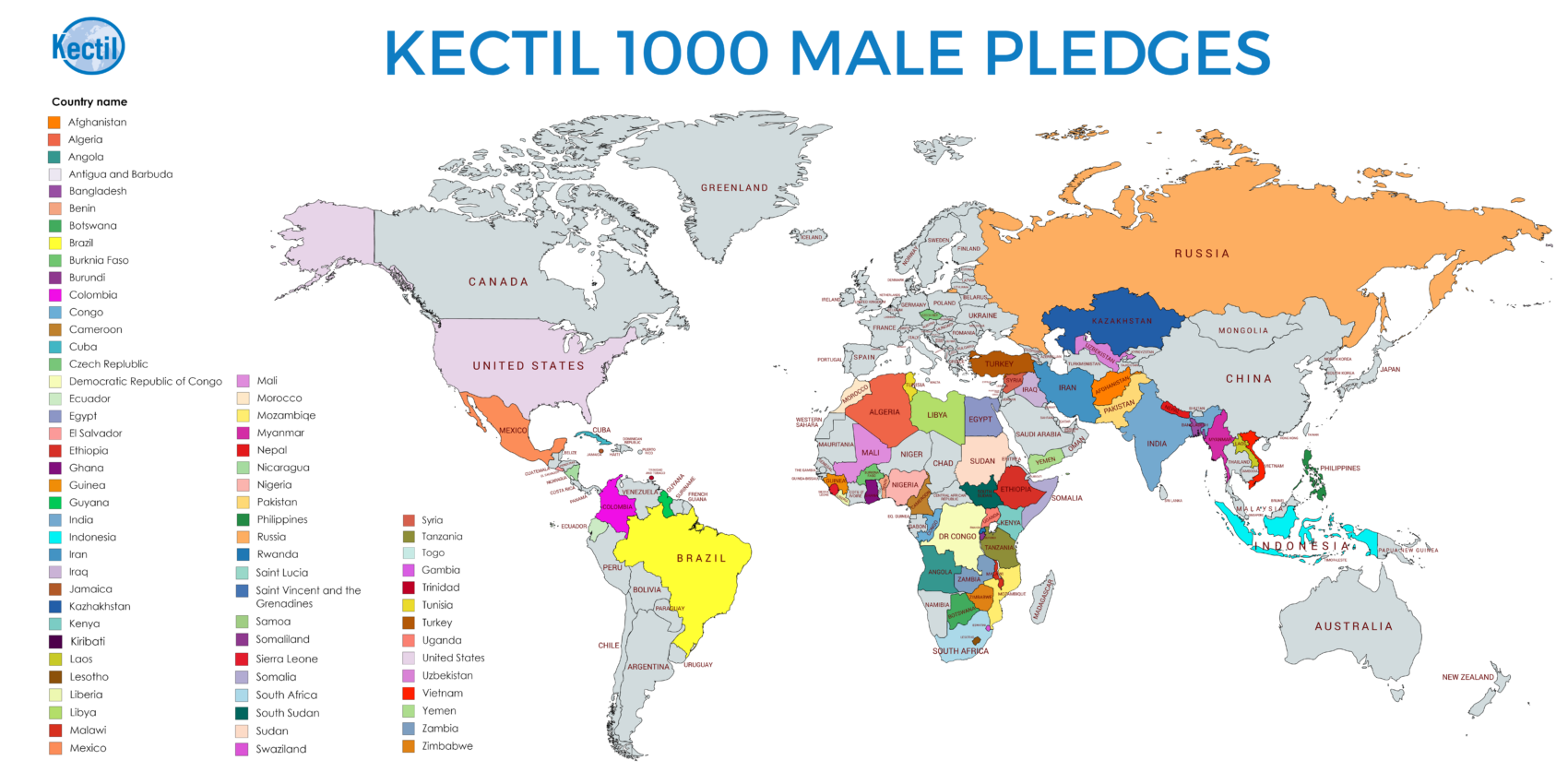 The Malmar Knowles Family Foundation and The Kectil Program are thrilled to announce that their “1000 Male Promise Keepers” Campaign has met its goal! Fully 1000 males from 72 countries have taken the brave step to commit to the pledge and have received certificates! We are so proud of each male that has stood up to be counted and make a difference. Well done!

The Campaign started in 2019 after Sherry Knowles visited Nairobi and also Kibera, which is outside Nairobi and the biggest city slum in Africa. She met with a non-profit group supporting the young girls in Kibera to avoid pregnancy. In Kibera, underprivileged young girls often leave school as a teen because high school is by tuition only. They are then left with nothing to do, and are susceptible to males of any age, including “sugar daddies”, who offer small tokens in exchange for sex. The male disappears into the night never to be seen again. When the girl gets pregnant, she is often forced out of her parents’ home as an embarrassment and without a support system for her or the baby, or is subject to family abuse as an increased financial burden on the parent(s). The baby destroys any hope of further education, and the girl’s ability to progress into society as a successful person is all but destroyed.

The non-profit was teaching the girls to get active in plays and art to keep them off the street. Kectil thought this was odd, because a girl can be in a play and still get pregnant! Also, a deeper conversation had to take place. According to MKFF and Kectil, the male bears responsibility for the pregnancy of the female. Without a male, there is no pregnancy! Therefore, MKFF and Kectil think the focus should be on teaching males to step up as ethical leaders and display their natural protective instincts to protect girls and the community as a whole, instead of committing virtual murder of the girl’s life without further responsibility.

This has been the backbone of the Kectil “1000 Males Campaign” movement.  When we started the Campaign, we had no idea if we could meet the goal, because the idea is counterintuitive to certain societies. We called for males to take the following pledge:

1. When you see a female you find attractive, you must ask yourself this VERY important question. “If I am with this female and she gets pregnant, would I be willing to take care of her and the baby with a full commitment?” If the answer is no, then put your hands in your pocket and walk away.

2. I agree not to hit or physically attack a female.

3. I agree to keep my eyes open as a protector to identify situations in which a female is at risk and will try to take reasonable steps to help if possible.

4. I will encourage other males to take the Kectil Promise Leaders Pledge.

It has been more than a year since we launched “1000 Males Campaign”, and we are so happy that 1000 males from 72 countries agreed to be counted!

An educated girl is more likely to become involved in the workforce and in turn, bring economic stability to her family and community. Studies have shown that women invest around 90% of their income into their families and communities thus reducing poverty and improving health, safety, and education for everyone. Kectil is also concerned with the rise in the number of females have experienced physical and/or sexual intimate partner or non-partner violence (according to a 2018 World Bank Report).

We would like to especially thank Kectil Colleague Michael Diala from Nigeria who really took on this Campaign and helped lead the effort! A big shout out to Michael!

We would also like to acknowledge the 72 countries that now have participants in the 1000 Male Promise Keeper pledge. We attach a map of the countries.

We will soon be announcing the reopening of the Male Promise Keeper portal on www.kectil.com  as well as a new Campaign to keep the momentum going! We hope that many more males will take the pledge! We could not be more proud of the males who are stepping forward to lead their societies with dignity, perspective and their natural protective skills to keep their community out of harms way! Stay tuned!