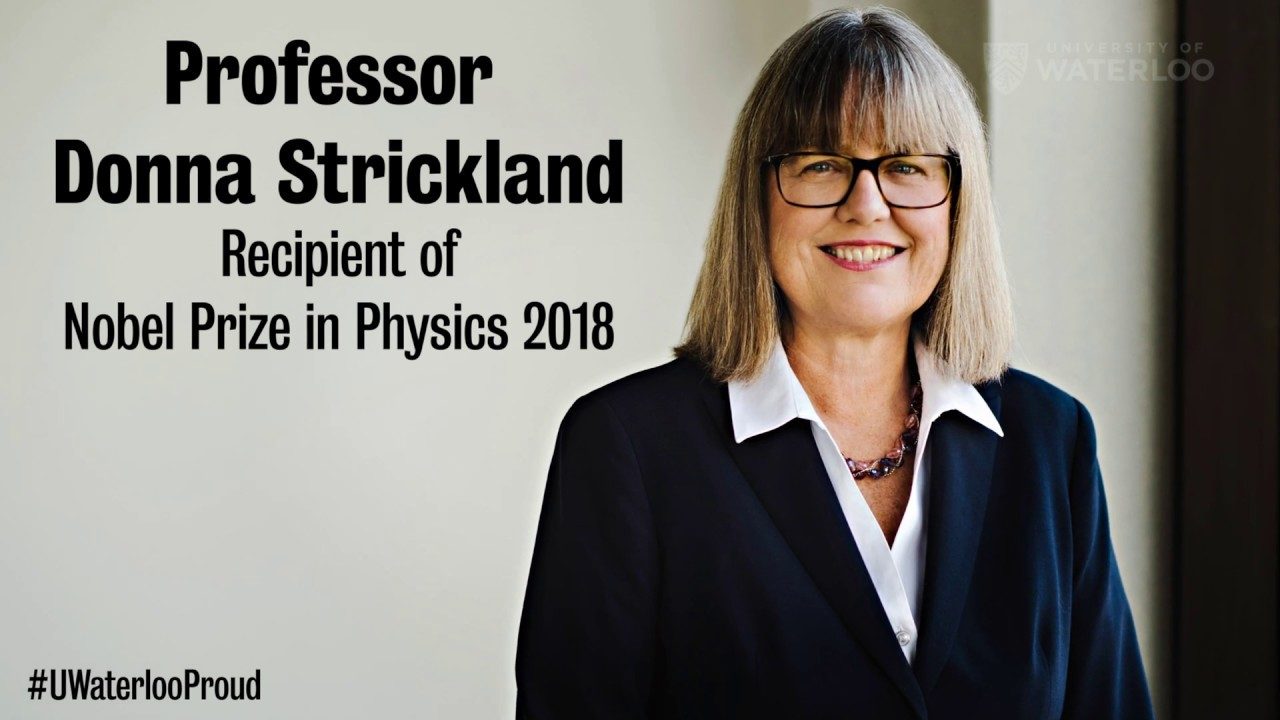 As we continue focusing on females in science, The Kectil Program congratulates Donna Stricklamd for her award of the 2018 Nobel Prize in Physics.

Ms. Strickland is a Canadian optical physicist and pioneer in the field of pulsed lasers. She is a professor at the University of Waterloo. She served as fellow, vice president, and president of The Optical Society, and is currently chair of their Presidential Advisory Committee. She attended McMaster University because its engineering physics program included lasers and electro-optics, areas of particular interest. At McMaster, she was one of three women in a class of 25. Strickland graduated with a B.Eng. degree in engineering physics in 1981. Strickland studied for her graduate degree in The Institute of Optics, receiving a Ph.D. degree from the University of Rochester in 1989. There, she conducted her doctoral research at the associated Laboratory for Laser Energetics, supervised by Gérard Mourou.

She was awarded the Nobel Prize in Physics in 2018, together with Gérard Mourou, for the invention of chirped pulse amplification. Strickland and Mourou worked to develop an experimental setup that could raise the peak power of laser pulses, to overcome a limitation, that when the maximal intensity of laser pulses reached gigawatts per square centimetre, self-focusing of the pulses severely damaged the amplifying part of the laser. Their 1985 technique of chirped pulse amplification stretched out each laser pulse both spectrally and in time before amplifying it, then compressed each pulse back to its original duration, generating ultrashort optical pulses of terawatt to petawatt intensity. Using chirped pulse amplification allowed smaller high-power laser systems to be built on a typical laboratory optical table, as “table-top terawatt lasers”. Their revolutionary technique, called chirped pulse amplification (CPA), led to the creation of small, incredibly powerful lasers now used in corrective eye surgery, industrial machining and medical imaging.

Strickland is only the third woman to win the Nobel in physics. The first was Marie Curie, in 1903; the second was the German-born US physicist Maria Goeppert-Mayer, who won in 1963. She is the first Canadian woman to win Nobel Physics Prize. She is also the only female living recipient of the Nobel Prize in Physics. In 1998, she received the Alfred P. Sloan Research Fellowship. In 1999, she was awarded Premier’s Research Excellence Award. In 2000, she received a Cottrell Scholars Award from Research Corporation and in 2008 she became a Fellow of The Optical Society.

In an interview with The Guardian in October, 2018, Strickland was surprised by the focus on gender. “I know there is certainly a lot of effort right now being placed on equity, diversity and inclusivity,” she says. “We consider that in our hiring practices and I’ve sat on many of the hiring committees. I was on the board of the Canadian Association of Physicists and we really discussed, as a board, how to incorporate these ideas. So, I’m certainly aware of the climate. But I don’t see myself as a woman in science. I see myself as a scientist. I didn’t think that would be the big story. I thought the big story would be the science.” Her Nobel win is a symbol of progress, she says.